Rainforests do not burn naturally. Fires are linked to deforestation, often driven by agricultural production.

Fires are not normal in rainforest ecosystems, since humid, closed-canopy forests contain little flammable material. Globally, only around 4% of all forest fires have natural causes, such as lightning or extreme weather events. In all other cases, humans are responsible, either due to the deliberate clearing of land or by carelessness.

Fires in tropical rainforests are linked to deforestation, with fire used to both clear and maintain land to produce products like beef, soy and palm oil, as well as paper and pulp.

Farmers clear primary forest by felling vegetation and leaving it to dry before using fire to prepare the area for agriculture. This alters the soil properties and makes the land more fertile. Fires are also used in areas that have already previously been cleared. Cattle ranchers, for example, might use this technique to eradicate weeds from their pastures. These fires can escape the intended boundaries, however, burning surrounding forests.

Extinguishing fires is not an effective way to stop the deliberate fires linked to deforestation – the root causes of deforestation need to be tackled instead. Governments, both domestic and international, play a role in the extent of forest fires each year through the policies and incentives they design. Additionally, for companies, there are real reputational risks if supply chains are linked to deforestation. A failure to address this could result in difficulties accessing markets and finance, as governments and investors get wise to the threats posed by increased fire. 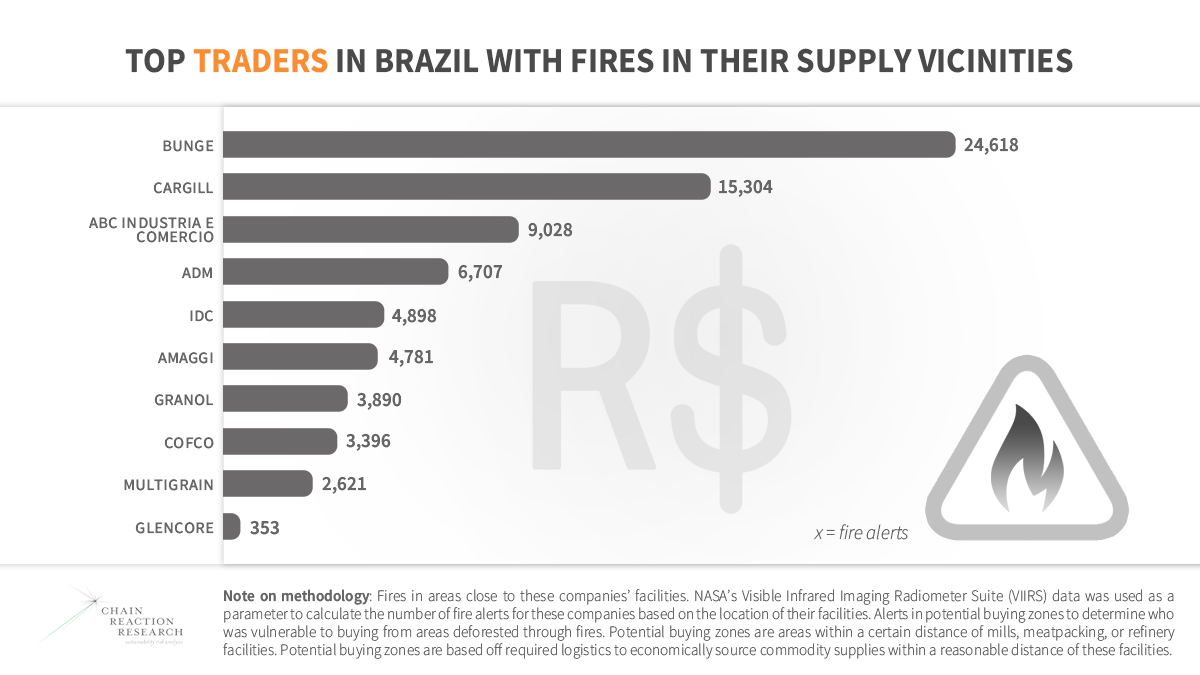 Policy and company decisions are key to halt deforestation and reduce the chances of forest fires. Both in Indonesia and Brazil, strong laws have helped to reduce deforestation and fires in the past. Governments can promote sustainable agriculture to show farmers that these practices are easy to adopt, economically feasible, and have long term social and environmental benefits, without the need to deforest the land. Companies and investors can also increase pressure on products linked to deforestation.

Clearing land for soy plantations and cattle ranching are a major cause of fires in Brazil.

The Amazon rainforest and the Cerrado grasslands are highly biodiverse ecosystems and huge carbon sinks. But these forests are being cleared at an alarming rate for soy and cattle farming. The increase in deforestation and fires, mostly illegal, has reduced the vegetation cover of the Cerrado to less than 50% of its original territory. The region now has the largest area of agricultural land and livestock in Brazil.

Brazil is the largest exporter of both beef and soybeans. China, the largest buyer of Brazillian soy, imports 48% of soy produced in the northern Cerrado region of Matopiba, while its second-largest importer, the EU, accounts for 17%. The situation is less extreme with beef, with roughly three-quarters of production consumed domestically. Nevertheless, the rest is shipped in sufficient quantities to make Brazil the largest exporter of beef globally. 2020 even saw record beef exports, growing 8% from 2019, despite the COVID-19 pandemic.

Large companies are also associated with the increasing number of fires. Soy traders Bunge and Cargill, for instance, together had more fires in their vicinities than all the other major soy traders combined. Among slaughterhouses, JBS, Marfrig and Minerva accounted for 60% of fires in the potential buying zones of the top ten companies.

In August 2019, Brazil suffered one of the worst fire seasons, with more than 30 million hectares of Brazilian land burned. This represents 3.7% of Brazil’s landmass. The subsequent 2020 fire season was actually more severe, increasing nearly 13% from 2019. In Brazilian Amazon, fires were up by nearly 16% and deforestation wiped out an area larger than Jamaica in the year to August 2020.

The Pantanal – the world’s largest wetland that stretches from Brazil into Bolivia and Paraguay – had an increase of more than 120% in fires in 2020. Nearly a quarter of the Brazilian Pantanal was devastated, amid the worst drought in nearly half a century. Overall, the number of fires that occurred were nearly three times higher than 2018 and the highest since 2010. For those fires that occurred in forested areas, research indicates a link to deforestation and criminal activities on private properties.

In 2021, Brazil is on course for yet another intense fire season, with a 13-year high for the number of fire alerts recorded for June.

Pressure from companies and investors is mounting to stop fires and deforestation in Brazil. In 2019, Nestlé stopped sourcing Brazilian soy from Cargill, while fashion brand H&M and shoemakers VF Corp announced they would no longer source Brazilian leather. In 2020, institutional investors managing a combined total of USD 3.7 trillion in assets, called on the Brazilian government to halt deforestation and rein in deregulation of environmental protection policies. In 2021, investors, UK supermarkets and food groups joined forces to criticise a proposed bill that could “enable faster destruction of the Amazon” in Brazil.  But the Brazilian government appears to still back the interests of agribusiness. Though strong national and international pressure stopped a law allowing operations on Inddigenous land from passing in 2020,in 2021 a new bill to limit recognition of reservation lands backed by the country’s farm sector is being voted on. 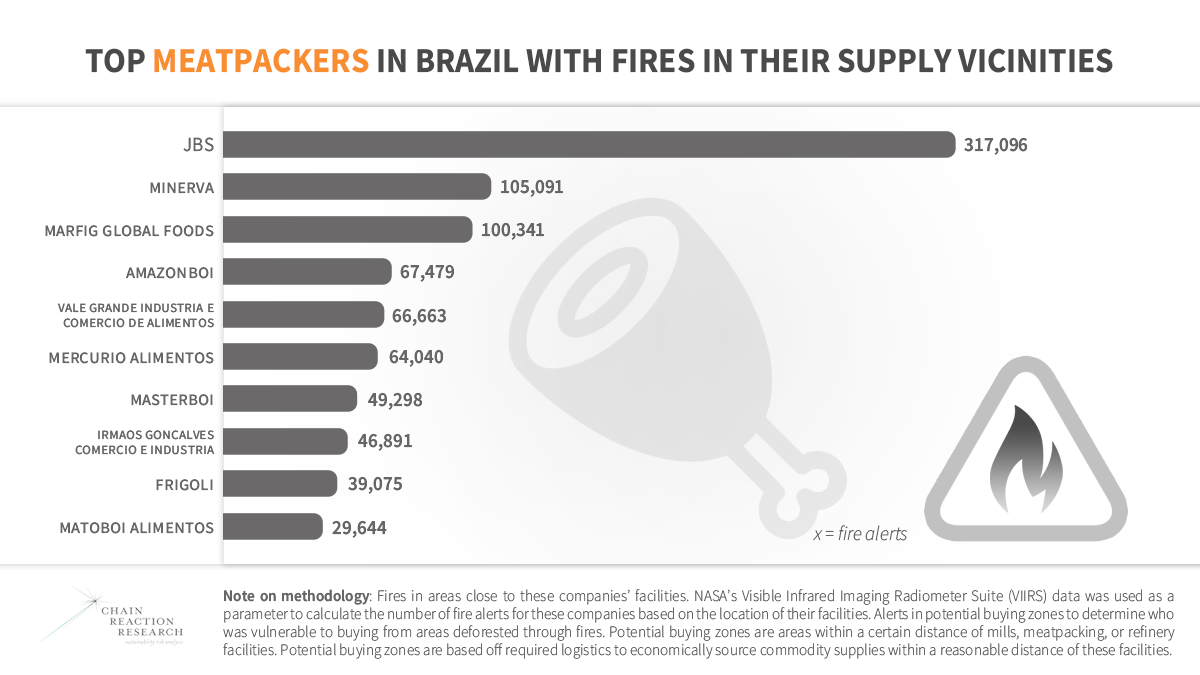 Clearing land for palm oil and pulp plantations is a major cause of fires in Indonesia.

Indonesia has the third-largest tropical forests in the world, which are home to 10-15% of all known plants, mammals and birds on the planet. Its tropical peatlands, which span to other countries in Southeast Asia, store more than three-quarters of global peat carbon stocks.

Indonesia’s forests have been extensively cleared using fire for the expansion of agriculture – mostly for palm oil, rubber, paper and pulp plantations. It is estimated that industrial‐scale plantations account for nearly half of Indonesia’s deforestation and are a major cause of fires. Between January to September 2020, nearly 207,000 hectares of forests burned. This is a fraction of the 1.6 million hectares – an area 27 times the size of Greater Jakarta – of forests that burned in 2019. These fires cost the Indonesian economy USD 5.2 billion in 2019.

In Indonesia, the government has primarily used moratoria on clearing areas of primary forest, but has failed to ensure that these are enforced and that conservation areas on existing plantations are adequately protected. Consequently, forested areas greater than the size of the Netherlands burned in the past five years, with 30% on pulpwood and palm oil concessions. In 2019, Indonesia fires emitted double the carbon of Amazon fires, with the resulting haze consistently affecting people’s health.

Indonesia is the largest producer of palm oil and its production is one of the leading drivers of deforestation in the country. Since 2000, more than 90% of global land area expansion for palm oil has taken place in Indonesia and Malaysia. Indonesia’s biofuel policies also incentivise palm oil production. In particular, the 2020 B30 programme, which aims to ensure that all biofuel products contain at least 30% palm oil, was hailed as a huge opportunity for growth by the Association of Indonesian Palm Oil Growers.

A 2020 “Omnibus Law on Job Creation” containing more than 1,000 amendments to at least 79 existing laws in Indonesia would greatly weaken environmental regulations. For example, the proposed law could potentially worsen forest fires, as criminal charges would no longer be applied to business people who commit environmental violations. Further measures to relax government protection of peatlands and a relaxation of slash-and-burn agriculture in late 2020 also increase the risk of fires in the country. 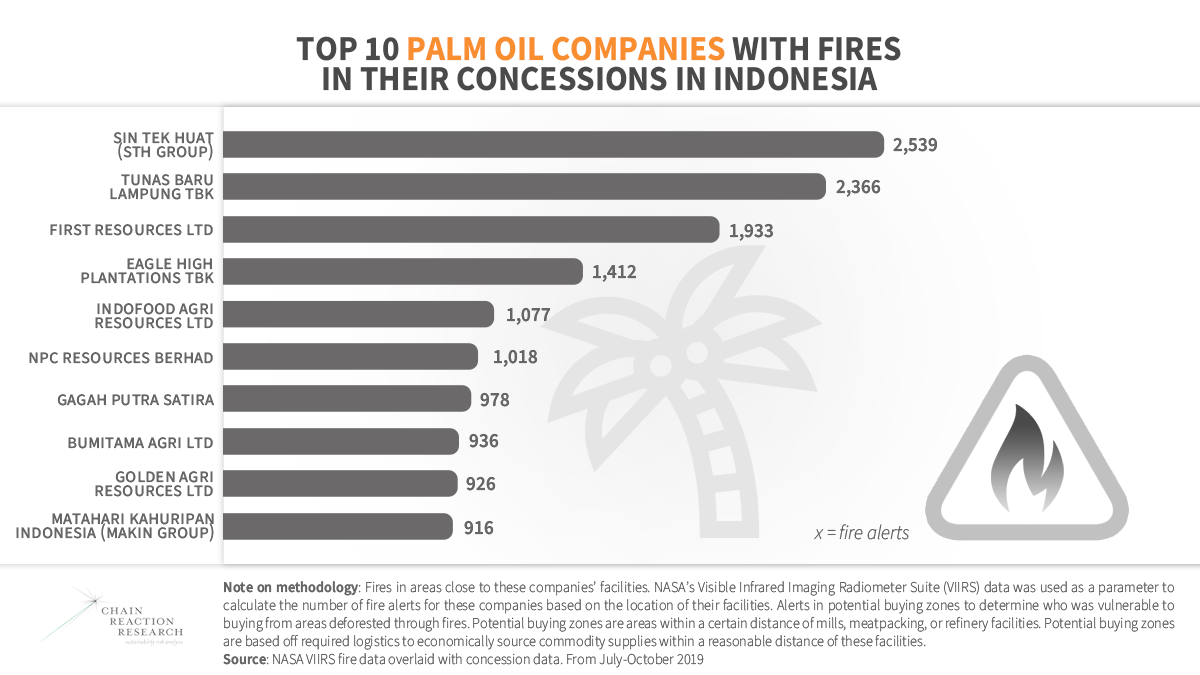 Children are forced to wear masks due to the toxic smoke from peat land fires. Kalimantan Tengah, Indonesia. Photo by Aulia Erlangga/CIFOR, 2015.

Soy and cattle farming are a major cause of fires in South America.

The Gran Chaco is South America’s second-largest forest, stretching from Bolivia, Brazil, Paraguay and Argentina. Two-thirds of it are in Argentina. It is extremely biodiverse and home to at least 30 Indigenous tribes.

The Chaco is disappearing due to the mass expansion of cattle ranching and soy production. It has one of the highest deforestation rates on the planet and may soon be gone outside of protected areas. Despite all countries with Chaco forest suffer from deforestation and fires, Argentina is where most of the destruction is happening (accounting for 80% of all Chaco deforestation). It is estimated that 25% of its land has been cleared in the past 20 years for the expansion of agriculture, leading to emissions that are similar to those of the Amazon.

In 2020, Argentina suffered one of the worst fires in decades, mainly in the heavily deforested areas of Gran Chaco and the Paraná Delta wetlands. Nearly 200,000 hectares of wetlands – almost 10 times the size of Buenos Aires – were in flames.The Argentine Chaco also recorded the highest number of burned areas between 1985 and 2015. A recent report found that 95% of fires in the country were caused by humans. Additionally, successive Argentine governments have overlooked Paraná Delta wetlands, encouraging the free entry of cattle ranchers.

Argentina’s forestry law hasn’t been updated since 2007. It has many loopholes and the agribusiness lobby has made it hard to enforce. Authorities have also struggled to regulate and extinguish illegal fires. The Supreme Court in 2020 ordered the creation of a committee to establish fire prevention measures to protect the wetlands and in an interview in March 2021, the environment minister indicated the intent to update Argentina’s forestry law.  Much needs to be done, with estimates showing that without a reduction in deforestation, Argentina would not have native forests in 70 years time.